Millennials - (Birth between 1980s to mid-1990s to early 2000s) Known as the generation that was born into the boom of technology and has used it to their advantage.

Being a part of this generation has been the best. I have been able to carry a CD player, an iPod shuffle, an iPod nano, all the way up to now a Samsung Galaxy S7 to listen to music, and it's all within the span of less than 10 years. As technology starts to grow, so does my generation's thoughts and ways of life. For example, YouTube. YouTube was not known for quite a while and just a site that very few visited and has now evolved to make people's dreams come true. There are people who post on there and are getting paid per view, per ad, per comment or whatever it may be, to the point where their job is now posting videos whenever they feel like it and are getting paid for it. It amazes me because growing up, we didn't have this. I was always told that you go to school to get an education so you can then be certified to work a 9-5 job and do that for the rest of your life. I sat there thinking. The rest of my life. Wow. I'm not even 25 yet and I want to burst into tears at the thought of that. So by this standard, I would have to work for somebody else.. for 8 hours per day, 40 hours per week, with a minimum of 2 weeks of vacation out of 52 possible weeks in the year, with some leeway of sick time.. and to do this for 40 more years? Until I retire at 65? Do you know how crazy that sounds? I just cannot believe that people actually do this. I've already worked for almost 10 years of my life and I already can't wait to retire.

What bothers me the most about having a job is the fact that I have a boss. By boss, I mean somebody who can just pick me up and put me wherever they please and I have to do it because that's what they're paying me to do. I use to not care but it's really starting to bother me more and more. The fact that I can't do anything about it, is what is really irritating me. But I also see this as a blessing. Had I not had that thorn in my side, I would have never tried to explore other options. With my generation because so versatile in technology and expanding with social media, I have been experimenting the same route. If they can do it, so can I. Right?! I don't know what God has in store for me but I see everything as a sign and a blessing. I will take everything as it comes and thank Him along the way. We'll just have to see what comes out of it! I'm excited! 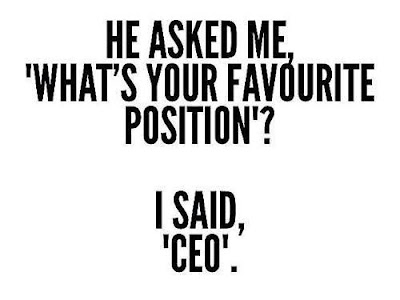